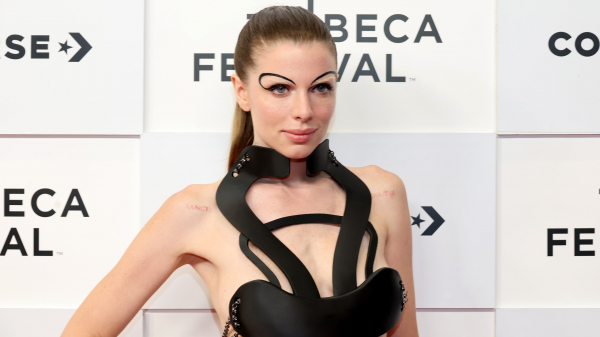 In case you hadn't noticed, Julia Fox's eyebrows have been M.I.A. since late May. Well, OK, they're still there, but the legendary Pat McGrath reportedly bleached them into virtual invisibility a few weeks ago. Since then, the Ahncuh Jahms muse has stuck with the edgy look. However, on Thursday, she added a dramatic new detail.

On June 16, Fox was spotted at the Tribeca Festival with what we're dubbing flying saucer brows. The futuristic look actually starts off as eyeliner. The black liquid thickly lines her top lashes, and wings out — but instead of stopping where even the boldest wings typically stop, they loop around and above her natural, bleached brows to create a somewhat sinister-yet-surprised-in-outer-space effect.

The rest of Fox's makeup is practically nonexistent. She let her liner-brow hybrid makeup and 3D-printed top do all the talking.

As of writing this, it's unclear if Fox did her own makeup or relied on a makeup artist like McGrath or someone else. As we know, Fox loves to do her own eye makeup; she famously "actually did it myself" for the Vanity Fair Oscar Party — the admission became a hugely popular audio clip on TikTok — and even did a tutorial. What we do know is that whatever liner was used stands up to a brisk bike ride through New York City, which is apparently how Fox got to the Tribeca Festival. 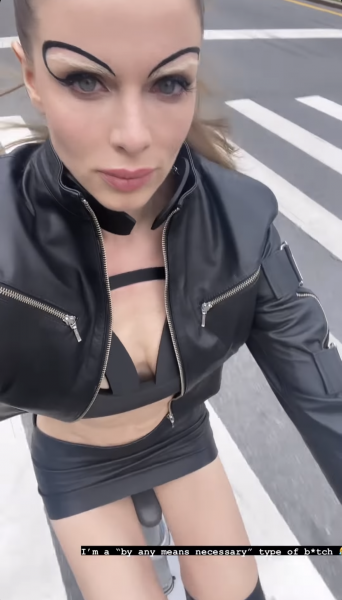 "I'm a 'by any means necessary' type of b*tch," Fox wrote on a video she posted, referring to how she was cycling to the festival. But we're pretty sure that philosophy applies to creating standout makeup looks, too.