The wait is finally over — Beyoncé is releasing new music. On June 15, the icon announced that her seventh album, titled Renaissance, is dropping on July 29. Even though she alerted her fans of the upcoming music a month in advance — a striking difference from when she released her self-titled album in 2013 without any promotion — she still made sure to keep us on our toes by sharing the exciting news in the middle of the night and appearing on the July cover of British Vogue just a few hours later.

This cover is nothing short of magnificent — and the Beyhive agrees. The "Spirit" singer looks like royalty sitting on top of a horse in an all-black Maison Alaia gown with a massive feather headpiece. The rest of the photo shoot is just as breathtaking and extravagant. In one image, she appears in another black outfit but with a leather jacket, black box braids that hairstylist Jawara twisted into what looks like Bantu knots, and a glossy black lip, painted by her longtime makeup artist, Sir John. She looks like the baddest person to ever live sitting on top of a motorcycle instead of a horse.

The hair and headpieces were clearly a focal priority in this shoot. They are striking, futuristic, and risky. In a few photos, she has dark hair instead of her usual blonde-highlighted strands, which is making some fans wonder if Queen Bey will be returning to her brunette era for this new album. 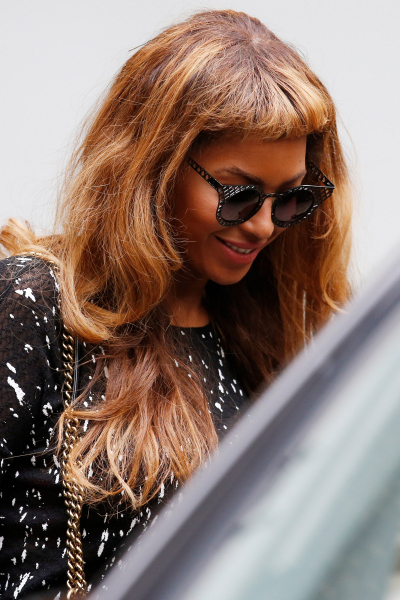 But there is one other hairstyle that is sparking some strong reactions from the Beyhive. The hairstyle in question is the choppy baby fringe she wears with a gilded Schiaparelli Haute Couture outfit and jewelry. These short bangs are far from Beyonce's norm and took several Twitter fans back to 2014, one of the few other times we have seen her with baby bangs.

If you don't remember that fringe, let me jog your memory for a second — they were thick, very blunt, and super short, stopping several inches about her forehead. She wore similar bangs in her '60s-inspired music video for "Why Don't You Love Me," which was released four years prior. She also had a pair of those stubby bangs in a brunette shade in her "Telephone" music video with pop star Lady Gaga. 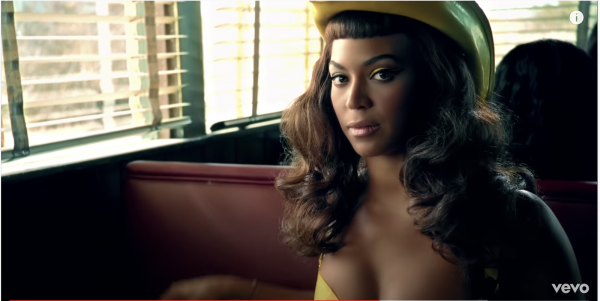 screenshot of Beyoncé from “Telephone” video

A few fans noted how the resurgence of these bangs indicated that the Houston singer's upcoming music is about to be epic. One user tweeted side-by-side photos of the spiky bangs and her baby fringe from 2014 and, "Beyoncé is NOT playing she brought the choppy bangs out." Another fan compared the two photos and commented, "Beyoncé even resurrected the chopped and screwed bangs. Act 1 taking no prisoners boyyyyy."

Not everyone was enthused about her short bangs, though. "Not the jagged bangs, Beyoncé, anything but that," one user tweeted in all caps. Another jokingly noted that the fringe was probably styled by one of her five-year-old twins. "I love that Beyoncé always includes her kids in her work, the fact that she got rumi and sir to cut her bangs/style her hair," the tweet reads.

Regardless of your feelings about the baby fringe, we're sure you're more than excited for the upcoming album — we definitely are. Some fans are thinking it's going to include disco and house influences due to rumors about artists she is collaborating with and the overall vibe of the shoot; it blends retro elements, such as a giant disco ball and platform boots, and futuristic designs. We won't fully know until July 29, but we're sure that Beyoncé will deliver hits as she always has.